Melanocytes, or pigment cells, originate in the basal layer of the epidermis which is the top layer of the skin. An abnormal horizontal growth of these cells results in the earliest form of melanoma which is called melanoma in situ. Because this form of early melanoma is confined to the top layer of the skin and has no contact with blood vessels or lymphatic vessels, there is no risk of the tumor spreading. Therefore, if this is surgically removed, there is a 100% cure rate demonstrating why early detection of melanoma is so important. 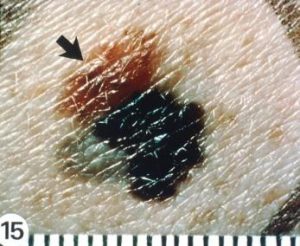 This is the most common type of invasive malignant melanoma comprising approximately 70% of all tumors. It starts in the basal layer and spreads horizontally for months to years before it invades into the dermis. It appears as a flat or barely raised pigmented lesion with irregular borders, like “ink leaching out into paper” and variable color. It is found most commonly on the trunks of men, the legs of women, and the upper backs of both sexes. It is diagnosed most frequently between the ages of 30 and 50 years. 50% occur in pre-existing moles and appear as a darkening or change in color of part of a mole. The other 50% arise as new moles on normal-appearing skin. 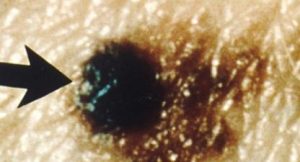 This type of invasive melanoma comprises approximately 10-15% of all melanomas. Instead of having a horizontal growth phase like a superficial spreading malignant melanoma, this has a quicker vertical growth phase meaning that the tumor invades the dermis at a faster rate. Therefore, the tumor often is deeper at the time of diagnosis and, as a result, has a poorer prognosis. Nodular melanomas appear to be blue-black in color (approximately 5% are pink or red) and are dome-shaped. Men tend to be affected more frequently than women. 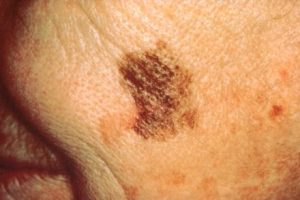 This type of melanoma accounts for approximately 5% of all invasive malignant melanomas and develops from a pre-existing lentigo (or age spot) that is very slow-growing and takes many years to develop. Like superficial spreading malignant melanoma, it has a very long horizontal growth phase before it invades the dermis. It is primarily a tumor of older adults and is found most frequently on the face but also on other sun-exposed sites. It appears as a flat, tan-colored patch with shades of brown, black, blue, red, gray, and white discoloration.

This type accounts for less than 5% of all invasive malignant melanomas. It is the most common type of melanoma in African Americans and Asians. It develops on the palms and soles as well as the nail beds. These appear as tan, brown, or black patches with variations in color and irregular borders. They can appear as a dark streak in a nail bed.

This type accounts for approximately 3% of all melanomas. While it is relatively uncommon, it is the most common type of ocular cancer in adults.