Exposure to the sun’s ultraviolet (UV) rays appears to be the most important environmental factor involved in the development of skin cancer, including melanoma. It is also the one factor that is most easily controlled. When used consistently, sun-protective practices can prevent skin cancer. UV rays from artificial sources of light, such as tanning beds and sunlamps, are as dangerous if not more so, as those from the sun and should also be avoided. There is no “safe” tan. Although both tanning and burning can increase a person’s risk for skin cancer, most Americans do not consistently protect themselves from UV rays.

Melanoma is an extremely preventable cancer when taking the following precautions:

Moles and Having an Atypical (Dysplastic) Nevi

The number and size of moles increases the risk of developing melanoma. Also, atypical or dysplastic moles (nevi) are a common genetic disorder. People with these nevus’s usually have several large moles with more than one color and they typically develop in childhood and increase in size and number through adolescence. If you have these moles and have a genetic predisposition to melanoma, you are at an especially high risk for developing melanoma and should be followed regularly by a dermatologist. Also, encourage your family members to get their skin checked.

Being Born with a Mole(s) 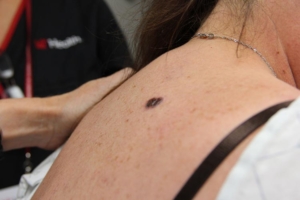 Parents should consult with their Pediatrician and/or Pediatric Dermatologist to determine the appropriate medical plan when dealing with these moles.

Developing one melanoma increases the risk of developing another melanoma.

Caucasians are 20% more likely than African Americans to develop melanoma because they do not produce as much pigment to protect them from UV exposure. Fair-skinned, red-haired, blue/green-eyed people have a higher incidence of melanoma. 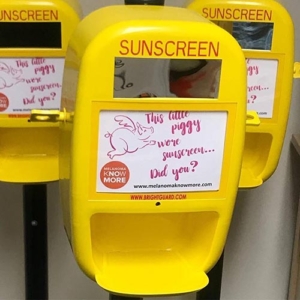 Being a White Male Over Age 50

People of any race and age can get melanoma, white men are at particularly higher risk. Melanomas on white men are most often found on the back.  Also pay close attention to moles on the scalp, since melanomas on the scalp have a higher mortality rate than elsewhere, because they are usually diagnosed at a more advanced stage.