2017 – Dr. Zalfa Abdel Malek and the University of Cincinnati Department of Dermatology

In 2017, Melanoma Know More partnered with another local melanoma non-profit, Andy Caress Melanoma Foundation (ACMF), to help support Dr. Zalfa Abdel-Malek and her team at the University of Cincinnati Department of Dermatology. In partnership with ACMF, we collectively donated over $32,000 to the University so they could purchase a plate reader, which is something Dr. Abdel-Malek and her team use regularly and without it research cannot be achieved! The lab at UC had an old plate reader machine that was on it’s last leg, which made it critical that we help support the purchase of a new reader. 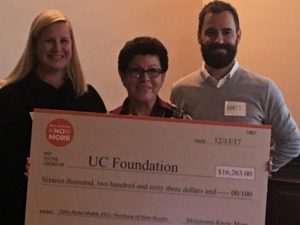 2016 – Dr. Zalfa Abdel Malek and the University of Cincinnati Department of Dermatology

Each year, Melanoma Know More presents a research award to an individual or institution on the front lines of skin cancer research. We are currently funding research projects at the University of Cincinnati  In 2014, we presented Dr. Zalfa Abdel-Malek with a 3-year commitment of for $20,000 per year ($25,000 in 2014) for her efforts in the understanding of the regulation of human pigmentation and the response of human melanomcytes to ultraviolet radiation.  In addition to our continued support for Dr. Abdel-Malek, we also elected to fund an additional University of Cincinnati researcher in 2015, Dr. Ana Luisa Kadekaro.  Dr. Kadekaro was our first award recipient in 2011.  This year, we presented Dr. Kadekaro with a $12,600 award to support her efforts in challenging melanoma cells with uniquely designed new drugs. 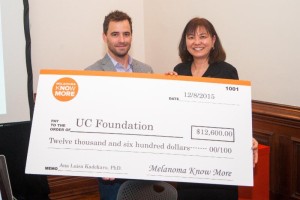 Melanoma Know More is pleased to announce that it has presented Dr. Zalfa Abdel-Malek and her laboratory at the University of Cincinnati with a $25,000 award towards their research in to the understanding of the regulation of human pigmentation and the response of human melanocytes to ultraviolet radiation (UVR), the major causative factor for skin cancers including melanoma.  The award was originally supposed to be for $20,000 for 2014; however, a very generous supporter and former board member, Dick Haglage, donated an additional $5,000 in honor of one of Melanoma Know More’s board member and melanoma warrior, Steve Hazlebeck.  Melanoma Know More has also decided to extend the award for two additional years (2015-2016) for $20,000 per year.  Congratulations, Dr. Abdel-Malek and her team at the University of Cincinnati!

Melanoma Know More is pleased to announce that it has awarded Dr. Ivana de la Serna, a researcher at the University of Toledo, a $10,000 award toward her research on the role of epigenetic regulators in melanocyte development, response to ultraviolet radiation, and in the oncogenic transformation of melanocytes to melanoma.  Epigenetics is the study of stable changes in gene expression that do not involve changes in DNA sequence or mutations.  Recently, the development of several drugs that target epigenetic regulators offers  promising new way to treat human diseases. Dr. de la Serna’s lab is focused on three key epigenetic regulators, the SWI/SNF components, BRD4, and PRMT5.  Her lab was the first to link the SWI/SNF complex to a melanocyte specific factor called MITF which is important for establishment of the melanocyte lineage as well as for melanoma proliferation and metastasis.  The SWI/SNF complex is made up of 10-12 different components.  They are currently elucidating the role of each SWI/SNF component in melanocyte development, melanocyte response to ultraviolet radiation, and in melanoma proliferation, metastasis, and response to current therapeutics.  Their goals are to identify the SWI/SNF components that can be targeted in melanocytes in the protection against the damaging effects of ultraviolet radiation and for treatment of melanoma.

Two new projects in the lab are focused on two additional epigenetic regulators, PRMT5 and Brd4.  Their current work is focused on elucidating their functions in melanocytes and melanoma cells.  “Brd4 is especially exciting because drugs have been developed that can alter its activity.  Our work suggests that Brd4 is not only a protein that can regulate melanocyte proliferation, but that it may also be targeted for melanoma prevention,” said Dr. de la Serna.

Their work on the SWI/SNF complex in melanoma, conducted in tissue cultured melanocytes and melanoma cells, has provided key insights into how this complex interact with melanocyte and melanoma specific factors to regulate gene expression and impact upon development, proliferation, and metastasis.  The next critical step will be to perform these studies in an animal model.  They have started experiments where we will disrupt one central SWI/SNF component, BRG1, in  a mouse model of melanoma and determine if the disruption of BRG1 promotes or inhibits melanoma initiation and progression.  They plan to assess tumor formation, and global changes in gene expression in mice disrupted for BRG1.  These studies are essential for determining whether BRG1  is a good target for melanoma prevention or treatment.

To learn more about Dr. Ivana de la Serna and her team at the University of Toledo, click here. 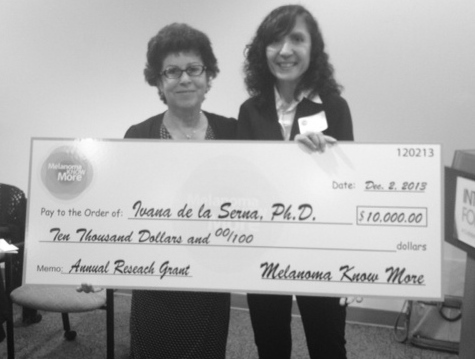 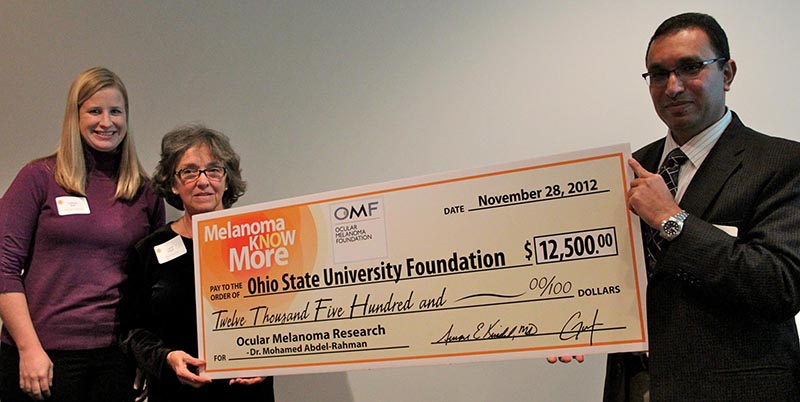 Melanoma Know More is pleased to announce that it has awarded Dr. Ana Luisa Kadekaro a $5,000 award toward her research on how melanocytes respond to ultraviolet radiation. The formal presentation will be made on November 30 at the Melanoma Know More annual meeting.

“We wanted to recognize a researcher in the Tri-state working to better understand how melanoma affects our community,” said Lisa Russell, a MKM board member and chair of the Research Award Committee. “We chose Dr. Kadekaro because she is a rising star in the field of melanoma research working right here at the University of Cincinnati.”

According to Dr. Kadekaro, sunlight is the major source of ultraviolet radiation and the most important environmental factor for melanoma development. Ultraviolet induced reactive oxygen species is an important player in the malignant transformation of human melanocytes.

Her research focus is on dissecting the complex antioxidant network involved in the protection of melanocytes in response to ultraviolet radiation. Dr. Kadekaro’s long-term goal is to find molecular targets that could be used in new strategies to diminish the harmful effects of ultraviolet radiation, particularly targeting individuals genetically vulnerable to oxidative stress and skin cancer. 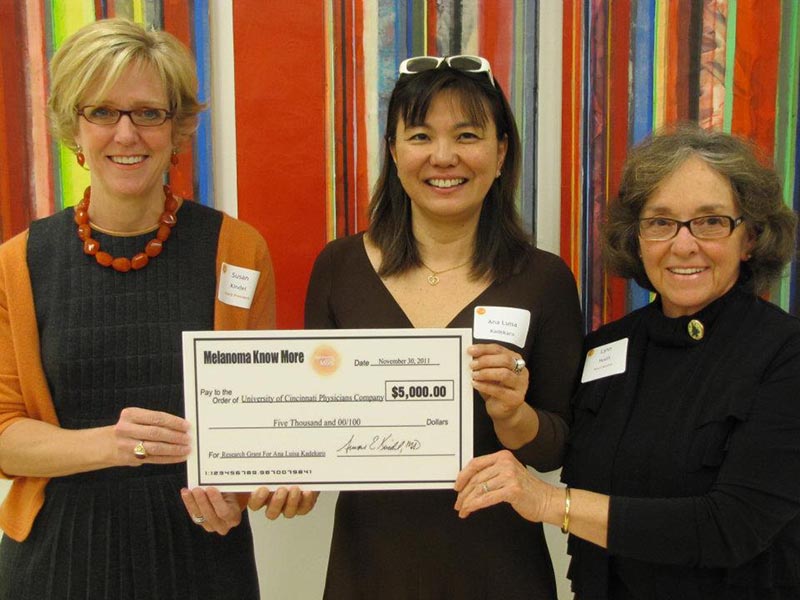